The 3-0 victory marks the Jacks first win over the Battery in five years. 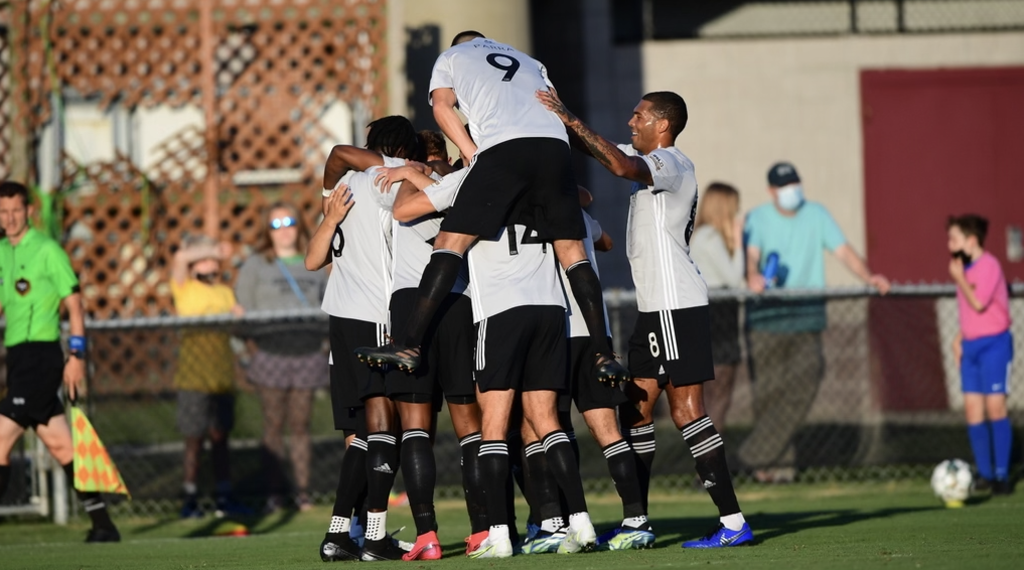 MOUNT PLEASANT, S.C. (May 14, 2021) - The Charlotte Independence won 3-0 over the Charleston Battery at Patriots Point Stadium, breaking the 5 year unbeaten streak and securing the team’s first win of the regular season. The club will be on the road again next week to face Pittsburgh Riverhounds SC on Saturday, May 22 at 7:00 PM ET (Watch on ESPN+).

The Independence escaped an early opportunity from Charleston’s #9 Stavros Zarokostas who took a strike from inside the box. The shot was deflected off the post, giving the Jacks the boost they needed to step up in the first half.

In the 12th minute, the Independence drew a foul at the top of the box. #4 Jake Areman stepped up to take the kick. His shot hit the top of the cross bar and deflected over to #8 Marcelo Palomino who secured an easy placement in the back of the net. Palomino earned his first professional goal on the night and put the Jacks in the lead 1-0.

“We played very well. The early goal was a huge confidence boost for us,” stated Charlotte Independence General Manager and Head Coach Mike Jeffries. “Defensively, I thought we did a really good job keeping our shape, and on a tough field we had stretches where we moved the ball very well. The second goal was very good from us in terms of the build up, it set a good tone and put us on the way to a good result.”

Just 6 minutes later, the attack developed from a long ball across the pitch. #14 Thomas de Villardi took it down the left hand side and put a beautiful cross in to a wide open #9 Irvin Parra. Parra took advantage and powered a header past the Battery goalkeeper. The Independence took the lead at halftime, 2-0.

The Jacks used the momentum going into the second half with #6 Junior Etou drawing a foul inside the penalty area at the 49th minute. Parra stepped up to take the kick and placed it nicely in the lower left corner of the goal.

The Battery used up all their subs in the second half, but their bench was no match for the Independence defense who held on firmly to the 3-0 win. This was the first clean sheet of the regular season for Goalkeeper #33 Brandon Miller.

“We came out with a game plan and we executed,” said Charlotte Independence Forward, Irvin Parra. “The team chemistry is building up in practice and we are working really hard. This is just a boost of confidence. The team performed great tonight, and that’s why we were the successful team.”

Next on the Schedule: The Independence will travel to Highmark Stadium to take on the Pittsburgh Riverhounds SC on Saturday, May 22 at 7:00 PM ET. The game will be broadcast live on ESPN+.