The Jacks played with ten men after #88 Christian Dean received a red card in the 66th minute. 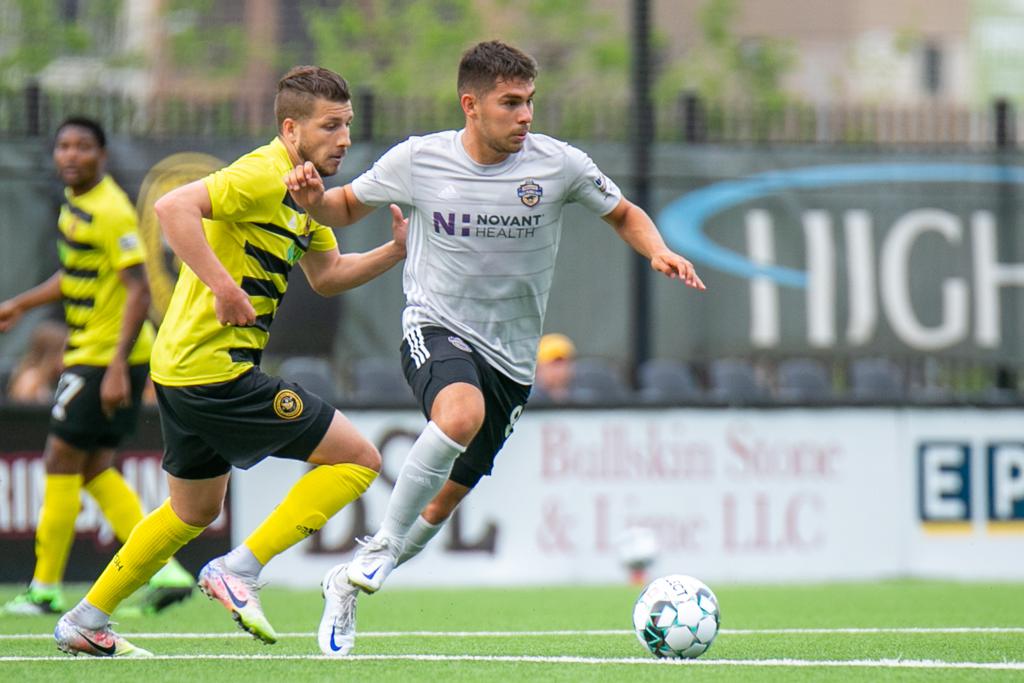 PITTSBURGH, P.A. (May 22, 2021) - The Charlotte Independence secured the 1-0 victory over the Pittsburgh Riverhounds SC tonight at Highmark Stadium in a big defensive effort after playing with ten men for a majority of the second half. The Jacks will be back on the road next week to face the Miami FC on Saturday, May 29 at 7:30 PM ET (Watch on ESPN+).

It was a lot of back and forth at the start as both teams settled in. The Jacks put together the first big attack in the 9th minute. A solid string of passes out of the back lead to a lofted ball in the box. Riverhounds Goalie, #1 Danny Vitiello, came out to intercept the pass and missed leaving #17 Clay Dimick with an open net, but the shot went wide.

The Independence continued to test the Riverhounds defense, breaking through the back line multiple times with shot after shot on frame. Their persistence was rewarded in the 34th minute when #8 Marcelo Palomino chipped a ball over the top to the foot of Dimick who volleyed a ball across the six-yard box. #9 Irvin Parra did well to position himself in front of the Riverhounds defender and, with a diving header, put the Jacks in the lead, 1-0.

From that point on the Independence defense stepped up big, including a diving save from Goalkeeper #33 Brandon Miller in the 43rd minute. The shot came off the foot of Pittsburgh’s leading scorer #10 Russell Cicerone to close the half.

Pittsburgh put the pressure on early in the second half with a corner kick that lead to a save off the head of #13 Brandt Bronico on the goal line. In the 66th minute, Independence defender #88 Christian Dean was sent off the field after receiving two yellow cards in the match. The Jacks made some key adjustments defensively, fighting off a series of strong attempts by the Riverhounds offense.

“I think it was a really good team performance tonight especially after the red card,” stated Charlotte Independence Midfielder, Brandt Bronico. “At that point, it’s not as much about soccer but more about the mentality. Everybody really put a good shift in tonight and did what they needed to do for us to pull off the win.”

The Jacks played to the final whistle including another huge save from Miller in the 96th minute to keep the clean sheet and secure another three points on the road.

“I thought it was a really gritty, hard-fought battle,” stated Charlotte Independence General Manager and Head Coach, Mike Jeffries. “We changed the system when we went down to 10 and sat back a lot deeper. The guys made plays that were hard to make, and we chased a lot of balls down. Brandt covered a lot of ground for us tonight and the work rate from everybody was massive which allowed us to stay relatively organized right until the end and limit their chances.”

Next on the Schedule: The Independence will travel to Riccardo Silva Stadium to take on the Miami FC on Saturday, May 29 at 7:30 PM ET. The game will be broadcast live on ESPN+.