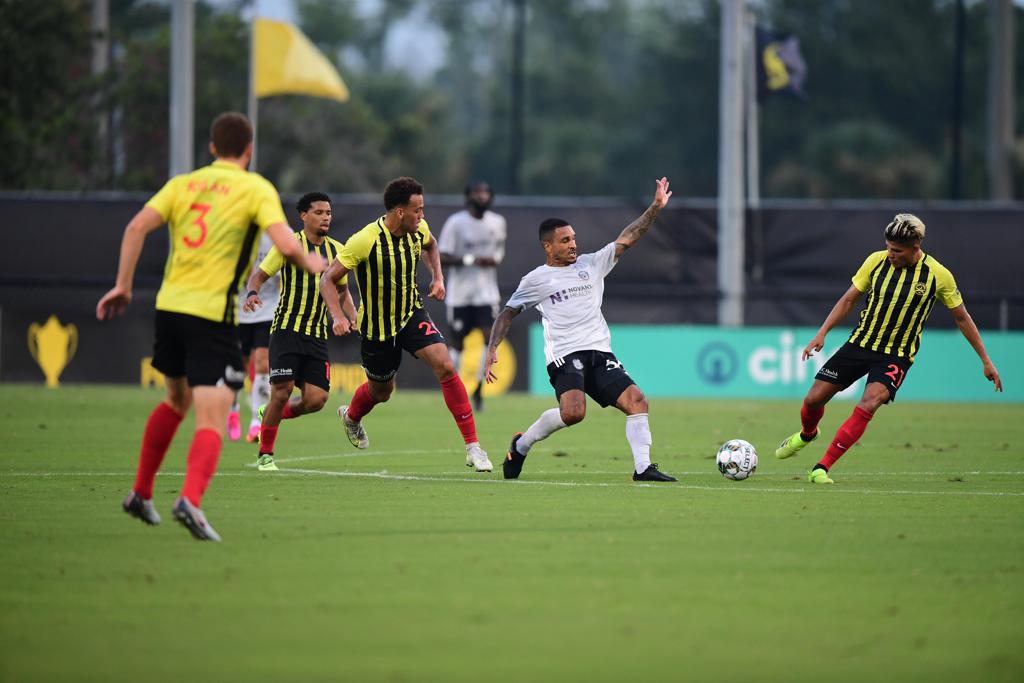 MT. PLEASANT, S.C. (July 23, 2021) - The Charlotte Independence fell to the Charleston Battery tonight by a score of two goals to none after previously defeating the South Carolina squad in two appearances earlier this season. The Charlotte Independence return home to American Legion Memorial Stadium on Saturday, July 31 to take on the Tampa Bay Rowdies for Coach Appreciation Night. Kickoff is scheduled for 7:00 PM.

It was a calm start for both teams to kick off the highly anticipated, and first official match, of the Southern Derby. The Charlotte Independence kept a majority of the possession early on, slowly building momentum into the Battery’s attacking third.

In his first start since signing with Jacks, #12 Adam Armour took off on the attack in the 26th minute and wound up drawing a foul inside the box. The penalty kick was taken by #56 Sylvain Marveaux. He shot low and right, but Charleston goalkeeper #1 Joe Kuzminsky came up with the save.

“It was a very good feeling to play my first game of the season with the boys and play the first professional game in my career,” stated Armour. “The boys made it as easy for me as possible. The result didn’t go our way but I’m excited to help the team turn things around for the rest of the season.”

The intensity grew later on in the half, but neither team was able to find the back of the net. The score after 45 minutes remained 0-0.

The Independence had a couple looks at goal in the second half with back to back corner kicks in the 52nd minute and a combination play between #19 Enzo Martinez, #9 Irvin Parra and #10 Valetin Sabella in the 69th minute. Neither of the opportunities would convert.

Charleston scored their first goal in the 53rd minute off a counter attack after the Jacks lost the ball in midfield. It was #11 Nicque Daley who found the back of the net. The Battery’s second goal came in stoppage time when #22 Joel Bunting chipped a volley over goalkeeper #33 Brandon Miller.

“We didn’t get the early goal, and I think that helped us in the other two games,” stated Charlotte Independence Head Coach, Mike Jeffries. “Obviously the missed penalty hurt. I thought the first half we were better in terms of possession and moving the ball. We didn’t get enough out of those possessions in the final third and weren’t quite sharp enough there. The difference was the one thing we had spoken about with Charleston, was we just got counter attacked off one of our set pieces and that was the type of play we wanted to avoid in a game like that. I thought we managed defensively very well and I thought we had a pretty good handle on the game. The game turned, as it often does, on one play and they were the ones that made it.”

NEXT ON THE SCHEDULE: The Charlotte Independence return home to American Legion Memorial Stadium on Saturday, July 31 to take on the Tampa Bay Rowdies for Coach Appreciation Night. Kickoff is scheduled for 7:00 PM. Click here to purchase your tickets.