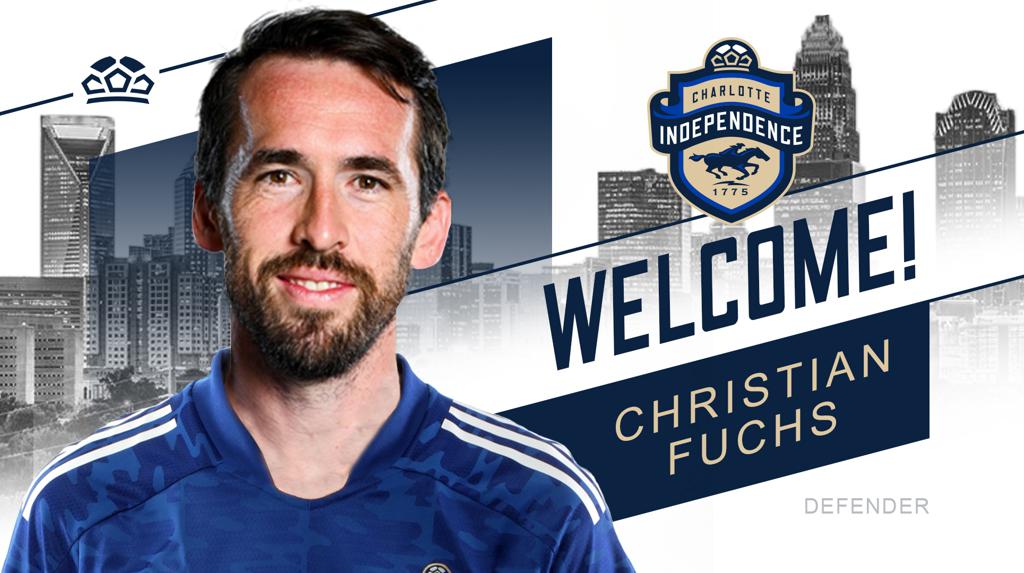 CHARLOTTE, NC (July 27, 2021) - The Charlotte Independence announced today that they have signed defender Christian Fuchs for the remainder of the 2021 season before he joins Charlotte FC for their inaugural season in 2022. Fuchs was a former captain for the Austria National Team and, in his first season, helped lead Leicester City to an English Premier League (EPL) Championship.

“Being able to add a player of Christian’s caliber and experience to our roster is a huge win for the Independence,” stated Charlotte Independence Head Coach, Mike Jeffries. “We are delighted to have him join our group. In addition to his on field experience and ability, Christian is a consummate professional. His quality of play, experience with top clubs, and leadership adds tremendously to our group. I wish to thank Zoran Krneta and the Charlotte FC staff for working with us to bring Christian onto our roster.”

Fuchs made his debut for the Austria National Team on May 23, 2006 in a friendly match vs. Croatia. He received the Captain’s armband on a permanent basis in 2012 and competed in all 10 matches as they qualified for the UEFA Euro 2016. Fuchs retired from international play in 2016 with a total of 78 caps.

The defender from Austria signed his first professional contract with SV Mattersburg at the age of 17. Prior to the UEFA Euro 2008, Fuchs joined the German side VfL Bochum and on June 6, 2011 he signed a contract with Schalke 04 where he competed in the UEFA Champions League.

In 2015, Leicester City announced the signing of Fuchs to a three-year deal. He made an appearance in the club’s third round League Cup tie against West Ham United and notched the assist for the game’s extra time winner. Fuchs continued to make an impact for the Foxes back line and earned his first Premier League start in October against Norwich. In his first season, Leicester City finished as champions, making Fuchs the first Austrian to receive a Premier League winners' medal since 1998.

During his time at Leicester City, the club led the Premier League in clean sheets and Fuchs himself led the league in successful tackles with 77, while finishing second in interceptions with 98. He competed with Leicester City until May 2021.

On June 7, 2021, it was announced that Fuchs will join Charlotte FC for their inaugural season in 2022.

“In the build up of me signing with the Charlotte Independence, I saw how engaged everybody is there and how hard they worked to get me signed to the Independence for the 2021 season,” stated Fuchs. “I spoke to Mike a couple of times already and he seems to really know what he wants from his players, from the team, and it’s really exciting to be in Charlotte. My future, and the next coming years will be in Charlotte, but to get to know the city, get to know the players, I’m ready to help and support the team to be successful.”