The Jacks took 15 shots on the night. 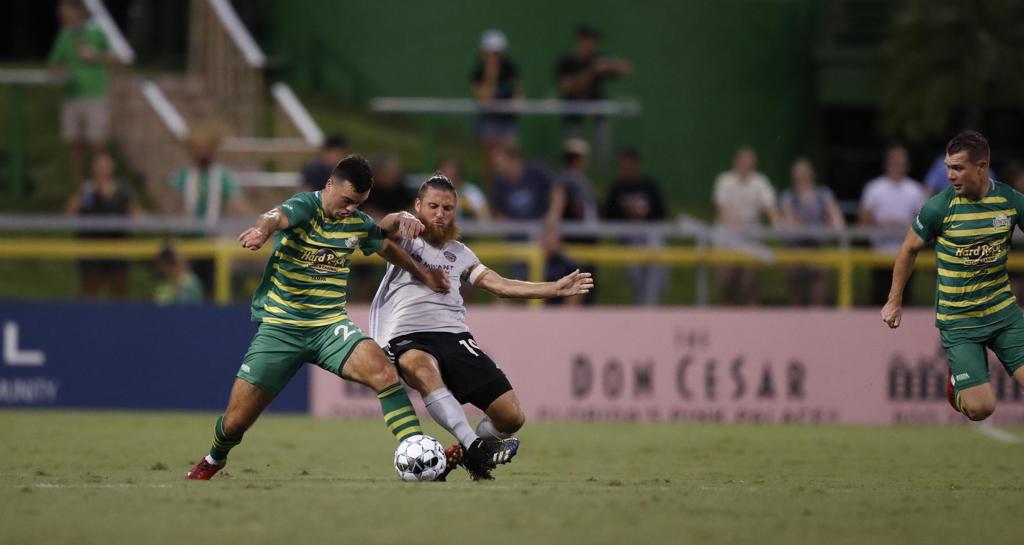 The Independence offense put the pressure on early playing mostly in their attacking third for the first portion of the match. In the 6th minute, #9 Irvin Parra took a shot from the top of the box. His attempt was blocked and found the feet of #56 Sylvain Marveaux who drove a low shot on frame, but was denied by Rowdies Goalkeeper #1 Evan Louro.

More momentum developed out of the back when #22 Christian Fuchs played a long ball into the box in the 15th minute. He found the feet of #19 Enzo Martinez who got a touch, but it was ultimately collected by the Rowdies defense.

Martinez’s best attempt of the half came in the 18th minute after winning a defensive tackle in the midfield. He dribbled down the pitch and took a strike from distance. The ball was deflected and went out of bounds for an Independence corner kick. Your Jacks took eight shots on goal and limited the Rowdies to just four. The score remained tied 0-0 at halftime.

“The first half we pressed and we had success. The second half they made some adjustments and it worked in their favor,” stated Martinez. “Hopefully we learn a lot from this game. To play to our strength. To adapt to games. But the mentality of this team is strong and we are already thinking about putting things right on Saturday.”

The Jacks came out strong again early in the second half, but then the momentum seemed to shift after a couple attacks from the Rowdies. #3 Hugh Roberts and #22 Christian Fuchs did well early on to make some big plays and keep the Jacks in the game.

In the 73rd minute, Tampa Bay passed the ball along the left-hand side of the pitch. Their cross found the head of #10  Steevan Dos Santos who pushed the ball past Pack and into the back of the net. Just three minutes later, the Rowdies gained possession again in the center of the park. It was #27 Laurence Wyke who played the ball into Dos Santos. He took the left-footed shot and left the Jacks trailing 0-2.

A number of substitutions came on in the latter part of the second half for the Jacks including the club’s newest signee #32 Gabriel Obertan. After a series of back to back corner kicks, the Independence were unable to answer. The final score, CLT 0 - TBR 2.

“Tonight is disappointing,” stated Charlotte Independence Head Coach, Mike Jeffries. “I thought we were really sharp for the first 25 minutes and had several really good looks. The fact we didn’t score set a difficult tone for us. I do think we needed to be sharper through the 90 minutes. The second half they pushed the game pretty well, and we didn’t respond or create as much as we needed to create to get at them. They're a good team at home, so it was a tough game for us, and I think we just need to move on, move forward from here and focus on the rest of the groups that we play. We have a really strong home stretch that we need to take advantage of. The focus will just be on being a little sharper and being able to play a 90 minute game.”

NEXT ON THE SCHEDULE: The Charlotte Independence return home to American Legion Memorial Stadium on Saturday, September 4 for Military Appreciation Night presented by Famous Toastery. The Jacks will face The Miami FC and kickoff is scheduled for 7:00 PM. Click here to purchase tickets.