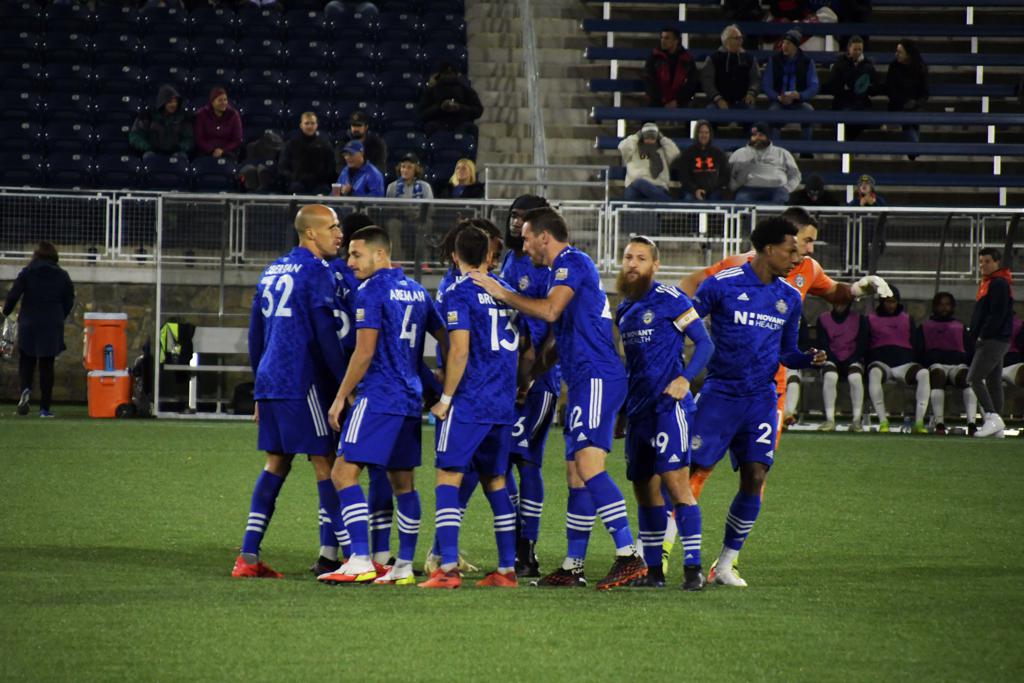 CHARLOTTE, NC (November 6, 2021) - The Charlotte Independence claimed their first ever playoff win by a score of 3-1 tonight over Memphis 901 FC at American Legion Memorial Stadium. The Independence will play next on Saturday November 13 against Louisville City FC at Lynn Family Stadium. Watch on ESPN+.

"An early goal is always a plus for confidence and being able to build. I think more importantly, after we scored, we continued to push the game and do what we have been doing,” stated Charlotte Independence Head Coach, Mike Jeffries. “I thought we created a number of other good chances in the first half. We got the goal off the corner, but there were probably other chances that we could've taken. I thought we just managed the game well, in the first half especially."

On a chilly November evening, the Jacks set the pace early with high pressure and creativity in the attack. Already taking opportunities in the 8th minute was #4 Jake Areman who saved the ball from going over the goal line with #32 Gabriel Obertan ultimately gaining possession. He took the shot, but it was deflected by the defense and out of bounds for a Charlotte corner kick.

Two minutes later #19 Enzo Martinez sent a long ball over to #7 Joel Johnson.  His first attempt was deflected by the keeper.  He regained possession and took the right footed shot for an easy pass into the center of the net. Your Jacks took the early lead 1-0.

"It was good to start the playoffs with a home game in front of a great crowd. I always love seeing the people come down and supporting us and having our backs,” stated #22 Christian Fuchs. “The atmosphere was amazing. We were off to a good start. You always wish for an early goal, and it was good the keeper made a mistake and served the ball on a silver platter to Joel. Overall, it was great being out there after the game. I have never taken so many selfies before. I am really happy with the support that we had today."

The opportunities continued in the 32nd minute when the Jacks earned another dangerous corner kick. Fuchs found the ball at his feet and took the strike. The Memphis defender made an attempt to block the shot, but the ball had already crossed the goal line and the Independence advanced the lead to two going into halftime.

The second half came with a little more back and forth and possession with both teams seeing success in the attack. Charlotte hit the ground running in the 64th minute. It was Martinez again who sent a long ball down the left side of the pitch for Obertan who crossed the ball in to #29 Dane Kelly, but the defense intercepted the ball and made the clearance.

Shortly after, in the 69th minute the Memphis keeper came out to break up a play from Obertan but missed and Johnson found the rebound. He sent the ball into a nearly empty box for Kelly who took for the left footed shot, but it just scraped the outside netting.

In the 71st minute, #56 Sylvain Marveaux secured the third, and final, goal of the night for the Independence after Martinez received the ball at the top of the 18-yard box. Marveaux pulled a few moves to get around his defender, took the left footed shot and slotted it into the lower left corner for the goal.

Memphis' one goal of the night came in the 83rd minute from #9 Kyle Murphy who was assisted by #2 Mark Segbers.

When asked about the team's keys to continued success during their playoff run, Jeffries explained: "I think about maintaining a really strong mentality day in and day out. Coming to the games, good concentration and discipline, which the guys have shown. We definitely believe in the quality of what we have been doing. The guys have shown confidence in that. I think we just go one game at a time."

NEXT ON SCHEDULE: The Charlotte Independence will be on the road next weekend to face Louisville City FC at Lynn Family Stadium on Saturday, November 13. Watch on ESPN+.