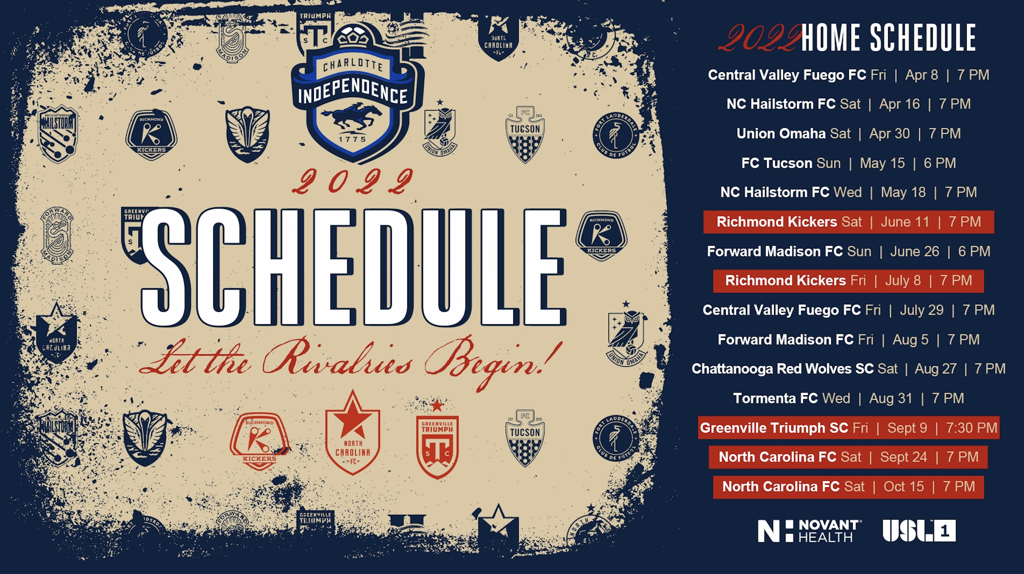 *Kickoff times may be subject to change.

CHARLOTTE, N.C. (December 22, 2021) - The Charlotte Independence 2022 regular season schedule is set as the club prepares for its USL League One debut. The Jacks will face a fleet of 11 new opponents and introduce a handful of geographic rivalries with North Carolina FC, Greenville Triumph SC and Richmond Kickers. The top six teams in the final regular season standings will then advance to the 2022 USL League One Playoffs.

The Independence will open the season in April hosting two expansion teams, Central Valley Fuego FC and NC Hailstorm FC, as well as the 2021 USL League One Champions, Union Omaha.

The 2022 regular season will conclude at American Legion Memorial Stadium on Saturday, October 15 with an in-state battle vs. North Carolina FC.

2022 Season Tickets are on sale now and can be purchased at charlotteindependence.com. The package features new Jack’s Season Ticket Holder Rewards which includes big savings, elevated experiences and VIP access throughout the season.

All Charlotte Independence matches will be streamed live on ESPN+.

The Charlotte Independence professional soccer team joined the United Soccer League (USL) Championship as an expansion team in September 2014. An ownership group led by Jim McPhilliamy, the President & Managing Partner of Major League Lacrosse’s Charlotte Hounds, acquired the USL franchise rights from the Charlotte Eagles. McPhilliamy and his investment group founded Queen City Sports Club with the goal of making Charlotte a better place to live through annual increases in both the quality and quantity of events that are provided for the community.

In the fall of 2018, Queen City Sports Club and the Charlotte Independence signed a 10-year lease to move to American Legion Memorial Stadium following a revitalization of the historic landmark set for the spring of 2021. The Independence is focused on building the profile of the club through culture, community and performance as the team moves to American Legion Memorial Stadium. For details on 2022 Season Memberships, visit charlotteindependence.com or call 704-206-1515.